I had had enough of eating pasta, burgers, panini and other types fast food every day for one semester. That’s why I think eating Chinese food today made me appreciate the different flavours and textures.

Despite the fact that my exams ended on Wednesday, I still was not in the mood for holidays. My mind was anxious about all the free time that I was going to have on my hands. After a very long and lazy morning, my friend and I decided to go to the Suzhou centre, which just recently opened its doors and which contained many luxury stores including one of my favourites, Forever 21.

It is still cold in the morning and all-day long but the sun made it better. Suzhou centre, called Su Zhou Zhong Xin, in Chinese, is located in what we call the pants’ building because the building resembles a pair of pants. I still remember quite clearly that the building was under construction when I first came to China, and I never thought that it would be home to so many stores.

It was imperative for us to have lunch as soon as possible before hitting the shops. My friend and I were both bored with the static food that we had been having for the past few weeks. That’s why we were craving for change. Despite seeing a wide variety of Italian, Thai, and other restaurants on the first, second and third floors, we were not impressed. We finally found a machine which would help us find a gem of a restaurant on the 6th floor of the South building. The Suzhou centre was divided into 2 parts, North and South. We took the escalators determinedly to satisfy our hunger but that did not prevent me from taking a few snaps of the transparent ceiling which let in natural light.

Having reached the 6th floor, I was quite impressed with the entrance of the restaurant which promised a traditional setting.

We were greeted by the servers and were immediately taken to a table. On our way to our table, I felt as if I was going in a village somewhere in China. I forgot that I was in a city, let alone in a modern building. However, I was quickly brought back to reality when the waiters asked us if we would prefer to order through WeChat which made it quicker and easier to order and pay for our food. The interior design of the restaurant was very beautiful. 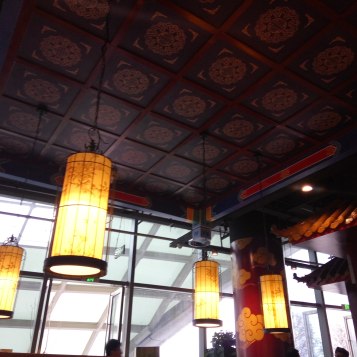 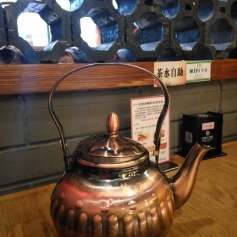 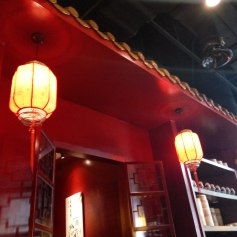 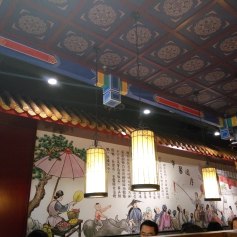 We ordered spicy chicken wings, sweet and sour pork, cauliflower (we need to eat a balanced diet), and of course the piece de resistance, the Beijing duck, also known as the Peking duck. I also ordered a Honey Pomelo juice which was a bit too sweet for my taste but which was delicious nonetheless. The duck was excellent and the other dish was tasty too! 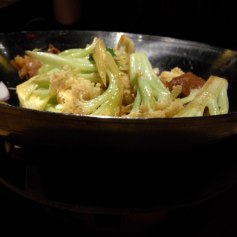 After such a heavy lunch, we made our way to the North part to find the Forever 21 store. The entrance to the North part was decorated with a theme that was a mix of Christmas and the upcoming Chinese New year. 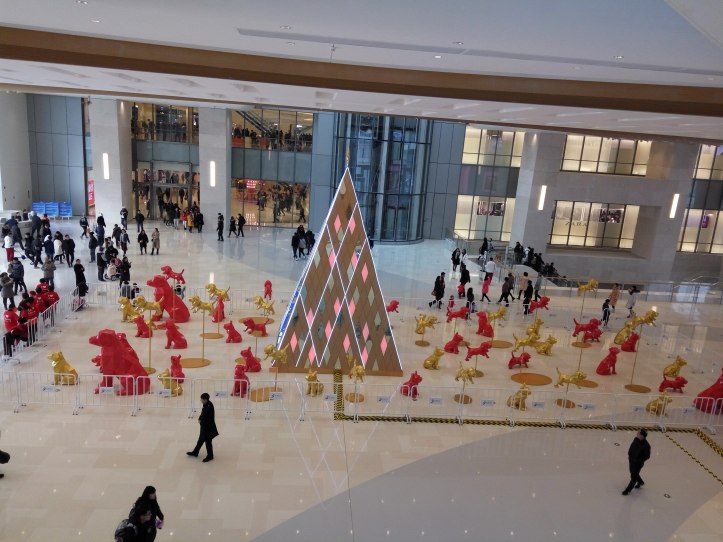 The second building was crowded and that was partly because there was a performance by a band playing English songs. It was actually refreshing to hear some familiar sounds. The band was led by a singer who had a powerful and melodious voice. She sang Price Tag by Jessie J, which is one of my favourite songs. This made me excited and.. happy after so long.

After listening to their whole performance, we headed to the boutiques and lo and behold, there was not just forever 21 but also Guess, Bershka and so many more, and they were all side by side. It was paradise for shopaholics.

I was not very impressed with the size of the store. Given that this was the first branch of Forever 21 in Suzhou, I was expecting something bigger like in Shanghai. Here it was just 2 storeys only. However, there were some cute pieces of stuff, like onesies and unicorn slippers.

We window shopped more and after a while we were tired. All this window shopping made us thirsty. There were many shops selling fruit juices, teas and some coffee shops like Costa Coffee and Starbucks. We narrowed it down to 2 choices, Starbucks or Costa Coffee. We went into Costa coffee but we didn’t find much variety of drinks. We went into Starbucks and I ordered a sparkling lemonade Kenya. Don’t ask me why Kenya is in the name of the drink, I would not be able to tell you.

I wanted to try something new and here I did.

It was not as good as I wanted it to be.

But well, I tried something new, something out of my comfort zone and what matters is not the outcome, but the experience of trying something unknown. It’s only through practice that we are going to make better decisions for ourselves

After chilling in Starbucks with our drinks, we decided to return home.

This trip evoked experiences that I had since long forgotten; fun and relaxation.

With this, have a great Saturday folks!

P.S Here is a sneak peek at the story I am going to post someday next week. It is currently being edited.